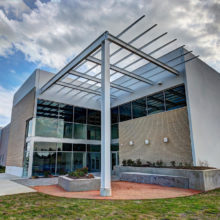 Pecan 130 Business Park was the first light industrial building constructed on the entire SH 130 corridor. PCDC Executive Director Amy Madison said pre-leasing the space was critical to encouraging the development, which was considered risky at the time. The MLA was established prior to breaking ground on the project to spur development along SH 130 in Pflugerville.

“We needed commercial buildings on the ground to be able to attract businesses, so we preleased half of the space to ensure that the buildings would be built. This allowed us visibility on the brand new highway for warehouse, distribution, logistics and research and development companies,” Madison said. “We are in the business of economic development, and this project is certainly a success with 240,000 square feet of office space fully occupied in these two buildings. Now it is time to give the project back to the marketplace.”

In a joint special meeting Nov. 28, the PCDC Board of Directors and the Pflugerville City Council approved an action to dissolve the MLA and transfer the subtenancies directly to 130 Commerce Center LLC.

“Back in 2012, Pflugerville did not have vacant office space, but today we celebrate at least 230 more jobs because of the Master Lease Agreement the City Council and PCDC put in place at that time to encourage the development of this project and encourage businesses to come to Pflugerville. We have attracted quality employers to the city because of our economic development strategy. The 130 Commerce Center can now stand on its own without the need for PCDC support,” said outgoing Pflugerville Mayor Jeff Coleman.

Pflugerville, Texas, was ranked 12th in MONEY Magazine’s list of Best Places to Live in America in 2016, and the 11th fastest growing city in the U.S. With a population of more than 55,000, Pflugerville is located just minutes north of downtown Austin in the desirable Central Texas region. State highways 45 and 130 and Interstate Highway 35 offer direct access to other nearby cities and a quick route to nearby airports. Hometown pride and quality of life are top priority, with residents enjoying the beautiful Lake Pflugerville, an elaborate trail system, shopping areas, new restaurants, and the community’s many parades and festivals.

PCDC is responsible for attracting, retaining and expanding businesses to create new jobs and increase tax revenue to support community development. The PCDC can provide funding for use as an incentive to companies locate and grow in Pflugerville. PCDC funds, which are 4B money generated from a half-cent of the city’s sales tax revenue, can also be used to construct needed infrastructure such as roads, utilities and drainage projects. For more information, visit www.pfdevelopment.com.

Nov 30 2016
PFLUGERVILLE, Texas (Nov. 30, 2016)—The Pflugerville Community Development Corporation (PCDC) today announced telecommunications company TesCom will relocate its national headquarters to Pflugerville and expand its business, bringing 33 full-time jobs within a year and 42 jobs within five years. In a regular meeting Nov. 17, the PCDC Board of Directors approve...Continue Reading

May 11 2016
PFLUGERVILLE, Texas (May 11, 2016)—The Pflugerville Community Development Corporation (PCDC) today announced that custom machine and robotics manufacturer SISU Devices will make a $2.1 million capital investment to expand at 1520 Royston Lake, an industrial area in northwestern Pflugerville. The company, which was established in 2010 by co-founders Russell Aldridge an...Continue Reading

Apr 22 2016
PFLUGERVILLE, Texas (April 22, 2016)—The Pflugerville Community Development Corporation (PCDC) today announced the addition of Karla Henderson as Operations and Administrative Manager. “Karla Henderson is an excellent addition to our team and comes to us with a wealth of knowledge in finance and operations management,” said PCDC Executive Director Amy Madison...Continue Reading